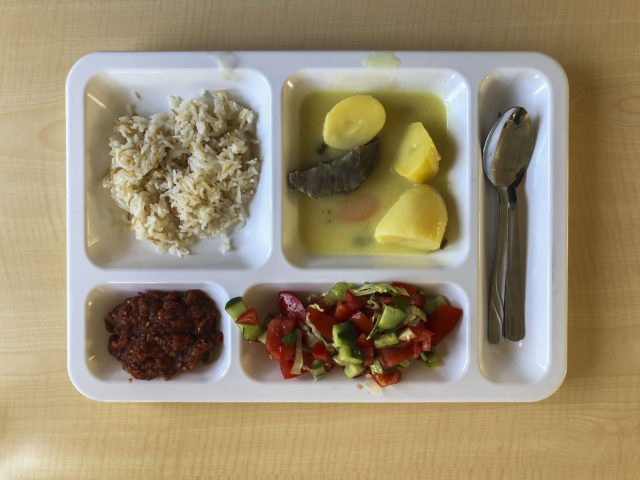 Tabldot food menu in the refectory

Around 7,000 inmates in New York City jails on Monday ate something other than meatloaf or beef patties for lunch. They ate veggie chili.

The five boroughs are home to 11 jails and correctional facilities, most of which are part of the notoriously grim Rikers Island complex, situated in the East River between Queens and the Bronx. Starting this week, all 11 will begin observing Meatless Mondays, having made a pledge to swap out all meat-based meals for a plant-based alternative one day a week.

The change is part of an effort to raise awareness of the potential health and environmental benefits of plant-based diets, according to a New York City Department of Correction (DOC) press release emailed to The New Food Economy.

“Going meatless once a week can reduce a person’s risk of chronic, preventable conditions like cancer, cardiovascular disease, diabetes and obesity.”

Launched in 2003, Meatless Monday is an initiative of The Monday Campaigns, working in collaboration with the Center for a Livable Future (CLF) at the Johns Hopkins Bloomberg School of Public Health. The campaign explicitly links excessive consumption of red and processed meat to chronic conditions such as heart disease, diabetes, and obesity.

It also positions meat-free meals as a way to address the environmental impact of industrial agriculture, which accounts for as much as 11 percent of global greenhouse gas emissions. The majority of those emissions result from raising livestock, according to the World Resources Institute.

As the initiative’s website notes, reducing meat consumption in response to changing cultural and economic conditions isn’t new: The movement traces its roots to World War I, when the U.S. Food Administration encouraged families to do their part for the war effort by cutting back on staples like meat and wheat.

Now, more than 100 years since the end of the first world war, the new enemy—at least, according to the Meatless Monday campaign—is “the prevalance of preventable illnesses associated with excesssive meat consumption.” That’s especially true for inmates of state and federal prisons, about half of whom suffer from chronic conditions like high blood pressure and diabetes. While inmates of local jails typically spend less time inside a facility, those who move on to serve longer sentences elsewhere will continue to be more likely than the general population to report having a chronic health condition.

New York City jails aren’t the first in the nation to include more plant-based meals in their food-service programs.

“Going meatless once a week can reduce a person’s risk of chronic, preventable conditions like cancer, cardiovascular disease, diabetes and obesity,” Glenn O’Connor, DOC’s director of nutritional service, said in the release. “It can also help reduce our [institution’s] carbon footprint,” and save water.

New York City jails aren’t the first in the nation to include more plant-based meals in their food-service programs. Last year, California passed a law requiring vegan food options to be made available in state prisons. Language in the bill classified veganism as an “ethical dietary belief,” akin to a religious observance.

Previously, in Maricopa County, Arizona, county jails shifted entirely to vegetarian food as a cost-saving measure. Inmates in one facility went on a hunger strike in response, saying the food, which included a soy-based stew, was nutritionally inadequate. Sheriff Paul Penzone disagreed, and said the plant-based meals were calorically sufficient.

The campaign has taken off among New York’s general population, too: In March, Mayor Bill De Blasio, a Democrat, announced that the city’s more than 1,800 public schools would serve vegetarian lunches to 1 million students, one day a week. The city runs the largest school food program in the country, representing $200 million in annual spending, according to a report issued by the city’s Office of the Director of Food Policy.

De Blasio’s Green New Deal, a wide-ranging environmental initiative modeled after a similar congressional resolution announced in February of this year, calls for reducing purchases of beef by 50 percent at all city facilities, and increasing alternative protein options. The plan, which also proposed phasing out processed meat purchased by city agencies, was blasted by the cattle industry. The president of the Nebraska Farm Bureau said De Blasio was perpetuating a “myth” that “U.S. beef production is destroying the planet.”

The DOC, which detains people who are awaiting trial or who have been sentenced for under a year, is a significant food purchaser.

Meatless Monday options for the Big Apple’s school children are colorful, featuring dishes like vegan burgers, meat-free meatballs, and mac-and-cheese. Inmates won’t be afforded that same kind of variety, according to menus shared with The New Food Economy.

Every Monday, inmates and staff at the city’s 11 correctional facilities will be served vegetarian chili, veggie burgers, or pizza pockets for lunch and dinner. Those items will replace standard correctional fare like salmon cakes, Jamaican beef patties, spaghetti and meat sauce, meatloaf, and frankfurters.

Inmates will continue to be served fresh fruit and hot cereal for breakfast, as well as steamed vegetables, salad, mashed potatoes, brown rice, whole wheat bread, and canned and fresh fruit for lunch and dinner.

The DOC, which detains people who are awaiting trial or who have been sentenced for under a year, is a significant food purchaser. It serves just under 10 million meals and snacks annually, making it the fifth-largest food provider in New York’s city government. The amount of food that it purchases still falls far behind education, homeless and children’s services, the Department for the Aging, and hospitals, according to a report issued by the City University of New York’s Urban Food Policy Institute.

Although changing meal offerings for 7,000 inmates isn’t likely to make a dent in New York’s contributions to climate change, city officials say it sets an important example for other municipalities.

“The way goes New York, like it or not, goes the country,” says Brooklyn Borough President Eric Adams. “So the mere fact that we’re doing it this year—trust me, that 7,000 is going to turn into 70,000 and eventually 7 million.”

For incarcerated people, going meatless once a week can be akin to penance.

Adams, a former New York City police officer who retired as a captain, has credited adopting a vegan diet with helping him manage his diabetes. He has been a vocal advocate for Meatless Monday, piloting the initiative in 15 Brooklyn public schools in 2018, and expanding it to the city’s 11 public hospitals in January.

He says that for incarcerated people, going meatless once a week can be akin to penance.

“We can show how people who violated their communities, by some form of criminal action, how by changing what they eat in a correctional facility, can actually give back,” Adams says. “It really just starts the entire process of, how do you start making amends for what you’ve done in life? And at the same time, how do you make amends with how your health is in life?”

“We start with the conversation about Meatless Mondays. People wake up on Tuesday and realize they didn’t die from not having meat,” he says. “The goal is to get people to acknowledge that meat is destructive to our environment and to our bodies. And then we can start drilling in on the menu, and showing the alternatives.”