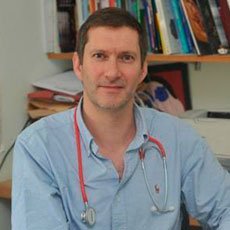 Simon Poole MBBS DRCOG is a Cambridge based medical doctor, author, broadcaster and commentator and is an internationally renowned authority on the science and application of the Mediterranean diet and lifestyle, explaining and celebrating the combination of wonderful ingredients in this beautiful cuisine which can add years to life. He is an expert scientific consultant on extra virgin olive oil and a member of the Advisory Board of the Olive Wellness Institute..
He is a member of Council of the highly influential US based True Health Initiative. He is a member of the Public Health Medicine Committee and General Practitioners Committee of the British Medical Association as well as a Council member of the Royal College of General Practitioners and a founding member of the British Society of Lifestyle Medicine and the European Lifestyle Medicine Organisation. Simon is an international senior collaborator with the NNedPro Global Center for Nutrition and Health, Cambridge and has previously been involved in teaching at Cambridge University primary care department.

Simon has regularly published on the subject of nutrition and lifestyle and public health in scientific journals including Nutrition and Food Science and the International Journal of Clinical Practice in addition to articles in the Guardian, for magazines such as Cook Vegetarian and Body Language and local, as well as international, radio and television appearances.

His new book The Olive Oil Diet takes a fresh and exciting look at diet, foods, cooking and health, on a gastronomic journey which tells the story of ingredients from around the Mediterranean – from different olive oils, mountain herbs and near eastern spices to regional vegetables and fruits, cheeses and wine. Unlocking the secrets of this most healthy of diets. The book has just been awarded the accolade of national 2017 winner in the international Gourmand Prize for food and cookery writing, and shortlisted for the “Best of the World” which is described as the food writing equivalent of the “Oscars”.

Conference addresses in recent years have included institutions such as;
The National Association of Primary Care, The Royal College of General Practitioners and the International Congress of the European Society of Cardiology, The Food and Drink Network, The Italian Trade Commission, the Fine Food Fair at OIympia as well as the Institute of Health Sciences of the USA , The Boston Common Ground Convention, Food Matters Live, London 2016.
Simon was co- organiser and chair, in association with the University of Florence, of the Food Values 2017 conference at the Academy of Pontifical Sciences, privileged to be hosted at the Vatican.