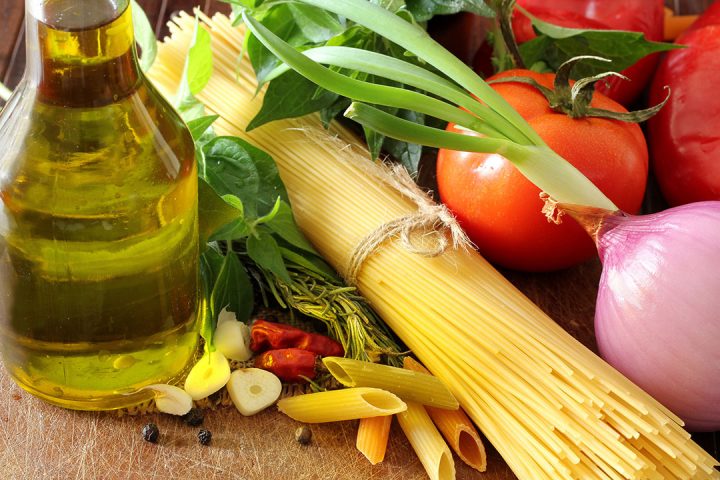 In nutrition there are no super foods, but rather nutritious foods that when consumed together, and often provide numerous health benefits. An excellent example is the Mediterranean diet, known for its palatability but more importantly its ability to prevent a variety of chronic diseases, this is a diet that is made up of various components that work synergistically to produce this effect.

The combination of olive oil and tomato along with various herbs not only makes vegetables much easier to consume, it comes along with certain health advantages. Olive oil, tomatoes and vegetables are all foods rich in antioxidants. Olive oil with its polyphenols, tomato known for it lycopene content another antioxidant known to protect from certain types of cancers, and of course the various vegetables that are also rich in antioxidants and fiber. However, although these ingredients independently have high nutritional value, when combined their value multiplies.

Research has shown that when vegetables including salads, are consumed with fat particularly a “good” fat such as olive oil we have increased absorption of carotenoids as well as fat soluble vitamins. Studies have shown that when tomato is heated along with olive oil it increases the absorption of lycopene and more recently Italian researchers found that adding olive oil to vegetables may lower blood pressure.

This simple but significant Mediterranean recipe is much more than a delicious sauce but something more: it promotes high consumption of vegetables making them more palatable, but also increases the nutritional value of the meal through the interaction of the various ingredients and nutrients.

The beauty of this sauce is that it can be made anywhere and anytime. One may think that in the winter tomatoes are not in season, however traditionally tomatoes were preserved in the form of tomatoes paste for the winter months and today we have a variety of canned tomatoes and paste available for us to use. Using this sauce with any type of vegetable enables us to serve vegetables as a main course, which means that in just one meal one can consume 2-4 servings in one sitting. This is significant considering that recently the Dietary Guidelines Advisory Committee is reporting that Americans are not eating enough vegetables. Just two vegetable main courses a week can result in a significant change.

This has implications not only at a household level, but also for meals prepared outside the home. School lunches can greatly benefit from a Mediterranean style preparation of vegetables. Instead of trying to increase vegetable consumption in children through raw vegetables and salads, cooked vegetables with an antioxidant rich tomato sauce will encourage a much higher intake.

Hospitals patients stand to benefit greatly from this Mediterranean cooking technique as well. With the wealth of scientific evidence, Mediterranean style meals should be a standard choice for patients. Mediterranean vegetable casseroles also have an additional benefit: minimal food waste; these dishes often taste better the next day. Traditionally they were consumed over a period of 2-3 days, today this would mean less food waste with proper storage.

Last week the Dietary Guidelines Advisory Committee Report prescribed a Mediterranean style diet for the first time to the American population. Due to its documented health benefits and palatability the Mediterranean diet has the potential to improve public health but also reduce costs.

To learn more about the application of the Mediterranean diet, the implications and the opportunities of adopting this dietary pattern in a variety of settings from the home to the cafeteria, plan to attend the first Mediterranean Diet Roundtable. An exclusive networking event and seminar bringing together the entire spectrum of decision-makers in the U.S. Food Industry, along with Doctors, Registered Dietitians, Nutritionists, and Directors of Food Service programs. The full-day program includes a discussion on the nutrition aspects of the diet, menu engineering, application in cafeterias, hospitals and stores, best practices in mass feeding programs and many more. Attendees will gain a better understanding of the health values and commercial/marketing benefits of sourcing Mediterranean products for clients and customers. For more information visit mdrproject.com.

Proceedings of the National Academy of Sciences: Protection from hypertension in mice by the Mediterranean diet is mediated by nitro fatty acid inhibition of soluble epoxide hydrolase