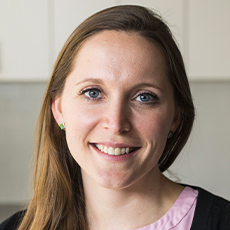 If you’d asked a young Stephanie Pixley what job she’d have as an adult, she probably would have answered “WNBA player.” While she had the height to make it, unfortunately her dribbling skills were sub-par, so she decided to turn to her other passion: her love of good food. She gained experience at an early age cooking dishes like Knödl and Sauerbraten with her German family, but later upped the ante by enrolling at New England Culinary Institute in Vermont. There, she quickly learned that restaurant cooking was not her forte, and instead was more interested in the how’s and whys of food. Through luck and hard work, she found her place at America’s Test Kitchen, where she is now Deputy Food Editor. Since her start there in 2011 she has had her hands in the development of over 20 cookbooks, from the How Can it be Gluten Free series to the Perfect Cake to Vegetables Illustrated and everything in between.