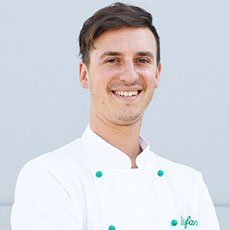 Stefano Vola is spontaneous, talented, and always with a smile, together with a passion for his territory and his work: these are the characteristics of an artisan and pizza creator whom we will hear from again and again in the future. With his feet firmly on the ground (the splendid wine country of Langhe) and mind turned to the future, Stefano has been guided by a compromise of ancient values ​​handed down from his family and the contemporary pleasures of modern digital sharing. Stefano’s career has gone from shop boy in a small grocery store selling organic products, to the docks of Rome, to the circle of the ‘illuminati of pizza’ led by Gabriele Bonci, and ultimately resulting in the completion of his project and the return to his home territory of the Langhe with the creation of his best pizza. From there a tam-tam of accolades from the public and critics ensued, leading to the prize awarded by L’Espresso of ‘Young Emerging Talent’ (2017) followed by the title of ‘Pizzaiolo Emergente’ (2018) for Gambero Rosso. His career has also been notable for his grabbing the prize of ‘Best Pizza Margherita’ in the summer competition, Pizza dell’Estate (2018), which may have inspired his friendship with the other king of pizza (this time Neapolitan), Gino Sorbillo.