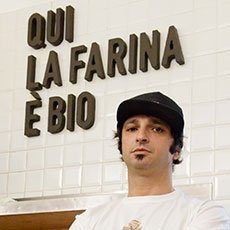 Salvatore Lo Porto, born in Chivasso in1976, and trained in Liguria, is a craftsman of “white art” from an early age, where decisive and enlightening professional meetings with individuals who are considered “institutions in their field”, such as Vittorio Caviglia and Biagio della Baracchetta di Recco, taught him the secrets of the famous cheese focaccia, which incorporate history and authentic ingredients that are difficult to transfer from their place of origin. Yet Salvo wanted to start a company and, thanks to his passion and a unique initiative, he returned to Turin to open his first Focacceria in the Quadrilatero Romano, armed only with a rolling pin, a wood oven and quality ingredients. In an article appearing in La Repubblica (October 24, 2017), Carlo Petrini said of Salvatore Lo Porto (known as Salvo): “Salvo brought the Ligurian focaccia to Turin and his focaccerias are now considered a real reference point in the field of quality street food for more than twenty years.” “Despite his responsibilities”, continues the “Carlin” founder of Slowfood, “Salvo remains a simple guy who shuttles between his three stores in Turin on his bicycle. And when he speaks of his focaccia his eyes shine.” He decided to churn out a quality product that could be enjoyed by everyone. And, little by little, his focaccias and pizzas-by-the-slice entered the official diet of the local Turinese and visitors alike. He subsequently opened a second store, the Focacceria Reale, in Piazza Castello, the very center of Turin, and a third location in the elegant via Lagrange . In the meanwhile, the Gran Torino brand was born from the ashes of the previous Focacceria Ligure, which today characterizes and distinguishes all of his activities. Now, the story of Salvatore is intertwined with that of the oil producers of Olio Roi (a Ligurian company) in a common project embarked upon at FICO Eataly World in Bologna, known as L’Ulivo Bistrot. Salvatore Lo Porto is an avant-garde artisan with a youthful and exuberant aspect, who does not fail to cook without his baseball cap.