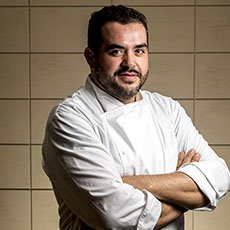 Roy Salomon Caceres, of Colombian descent, moved with his mother to Italy at the age of sixteen. He started his career at the bottom, first accepting work as a dishwasher. Soon, he managed to impose his talent for cooking in more influential ways, resulting in jobs in the kitchens of Cortina and Forte dei Marmi, as well as at the Relais & Chateaux restaurant, Il Pellicano, in Porto Ercole. His next achievement occurred at the Locanda Solarola restaurant, where he earned his first Michelin star. In 2010, he arrived in Albano Laziale from the Roman restaurant, Pipero, and then started the Metamorfosi project in the heart of the Parioli district of Rome. It is here that he proposed his cuisine influenced by a strong South American origin, a tradition rich in exotic stimuli. His creativity has resulted in an elegant interpretation and magical meeting of local and Latin ingredients, the “children” of an international evolution, with a Mediterranean pin around which his dishes orbit, exhibiting intense sauces, herbs, spices and textures that result in unexpected sensory responses. Such creativity at the Metamorphosis restaurant has earned Roy a Michelin star, as well as excellent reviews in other industry guides.