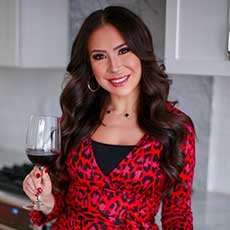 Rossella Rago is an award-winning cookbook author and entrepreneur, with a strong online platform (well over 900K followers) that focuses on cooking, lifestyle, and travel.  She is the host of the online cooking show and food webisode series, “Cooking with Nonna” and a member of the Italian American Power Hour podcast. Rossella was the winner of the Food Network’s 24-Hour Restaurant Battle: Italiano Battle. She runs successful culinary tours to Italy, and also designs cookware and other retail products in her “La Dolce Vita Collection”.

Her deeply rooted heritage began in Mola di Bari, a small fishing village in Puglia, where her  parents were from. Born and raised in Bensonhurst, Brooklyn, Rossella graduated from St. John’s  University with a B.A. in Italian Literature. She lives with her husband in Bay Ridge, Brooklyn.