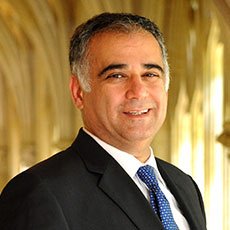 Rafi Taherian is an innovative food industry leader with a passion for creating concepts that support and enhance food system resiliency. Rafi believes that campus dining operations can be a testing ground for positive and pragmatic change. He has forged collaborative partnerships within Yale University and in the food industry that have created a benchmark reputation in dining services for one of the most prominent institutions of higher learning.

Since 2008, Taherian has guided the continued development of Yale Hospitality’s well-known sustainability initiatives and robust, viable, culinary concepts by merging principles of a healthy plant-based Mediterranean diet with an operational approach that promotes regionally-based and sustainable food systems. He is a member of many industry councils and advisory boards promoting the integration of manufacturers and distributors to address the key issues facing the industry. In 2014, he hosted a regional conference focused on food system issues in and around the I-95 corridor.

Taherian has received numerous prestigious awards for his vision and leadership. These include Food Service Director of the Year award in 2013, the Illuminating Excellence and Leadership award from Premier, one of the industry’s largest procurement organizations, in 2014, Yale University’s Seton Elm-Ivy Award in 2016, and FARE’s 2016 Excellence in Leadership award. Ultimately, Taherian’s contributions were recognized by his peers in 2016 when he was awarded both the Silver and the Gold Plate Awards sponsored by IFMA, the International Foodservice Manufacturers Association (the Gold Plate is widely recognized as the most prestigious award in the industry).

Yale Hospitality serves more than 15,000 meals per day with a staff of 840; it includes culinary, service, management and clerical personnel. Taherian’s organization is comprised of three operational divisions with shared business and administrative support and an annual budget of $55 million.

Before joining Yale, Taherian was the Executive Director of dining at Stanford University. Prior, he held various management positions in the hospitality industry. As an undergraduate, he studied architecture at IUAV in Italy and later earned a hospitality degree at the Culinary Institute of America in Hyde Park, NY.