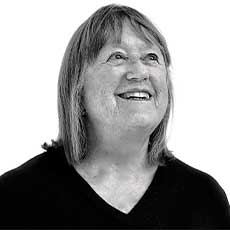 Nancy Harmon Jenkins is a nationally known food writer who has traveled the world looking for the connection between who we are and what we eat. She is the author of a number of books, the latest of which are Virgin Territory: Exploring the World of Olive Oil (Houghton Mifflin, 2015) and The Four Seasons of Pasta, written with her daughter Chef Sara Jenkins (Avery/Penguin, 2015).

Jenkins is also the author of The New Mediterranean Diet Cookbook (Bantam, 2011), Cucina del Sole (Harper, 2007), The Essential Mediterranean (Harper, 2003), Flavors of Tuscany (Broadway, 1998) and Flavors of Puglia (Broadway, 1997). Her first cookbook was The Mediterranean Diet Cookbook (Bantam, 1994). Reviews of that book hailed her as “one of the food world’s most respected writers” and “one of the most respected American writers on food, travel, culture and history.”

Jenkins has worked as a staff writer at the New York Times, and as publications director of The American Institute of Wine & Food. She was a founding director of Oldways Preservation & Exchange Trust. She now works primarily as a free-lance. Her work has appeared in Saveur, Food & Wine, Bon Appetit, and a wide variety of other publications, from Smithsonian to Vegetarian Times, from Modern Maturity to Eating Well, from Down East to Wooden Boat. She also writes frequently for The Art of Eating quarterly.

Jenkins has lived, worked, cooked, traveled, and raised two children throughout the countries of the Mediterranean, at various times making a home in Spain, France, Italy, Lebanon, and Cyprus (as well as in Hong Kong and England). She now divides her life between a Tuscan farmhouse and a home on the coast of Maine. She is also the author of The Boat Beneath the Pyramid (Holt 1980), a major study of ancient Egyptian boats and maritime technology, and co-author of Love with a Harvard Accent, a novel about student life in Cambridge.

Jenkins has appeared frequently on radio and television food shows, including “Ciao, Italia!” and “Cucina Amore,” both on Public Broadcasting, and has been a guest on many radio talk shows. She has taught courses in food writing and in Mediterranean food and culture at the Radcliffe Seminars (Harvard University), Boston University’s Metropolitan College, and the Culinary Institute of America’s Graystone (Napa) and Hudson Valley campuses.