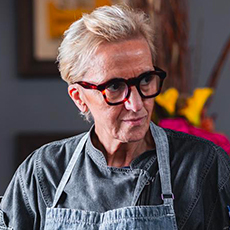 She is a big part of the female iconic Boston-based chefs that hasn’t needed last-name notation because the food across their specialties has been their calling card. And when it comes to Italian, no none has done more to introduce the region to creative, authentic fare than Marisa Iocco.

A native of Abruzzo in Southern Italy’s region and trained in architecture, fine art and the fine art of cooking, as Boston’s only Italian-born female executive chef, Marisa’s decades-long legacy of soulful, edgy, groundbreaking interpretations of traditional Italian has tempted, tickled and filled the stomachs of loyalists who have followed her remarkably criss-crossed path of restaurants across the city.

Marisa opened her first restaurant in downtown Boston, Galleria Italiana, to huge acclaim, earning raves from critics and consumers locally, regionally and nationally. Morph-ing from a popular lunch buffet to the city’s hottest dining room and one of 1990’s top new Italian eateries in the country, Marisa’s name became synonymous with modernity. “I like to keep it simple,” says Marisa, “but you will be surprised at the sophistication be-hind modern Italian cuisine. It’s what happens when you have beautiful ingredients combined with the technique and love for food I learned from my mother.”

Marisa also consulted for restaurants, including Spiga in 2007. Located in Boston’s metro West area some 12 miles from the city’s center, under Iocco’s care, Spiga turned from tired trattoria to trusted local favorite serving rustic, hearty Italian. After its relaunch, Marisa went on to be the executive chef at two additional restaurants (Gennaro’s Five North Square and Scopa); she launched a line of prepared foods, “Cibo Cibo con Amore” (Food with Love); and she recently published her memoir/cookbook, Every Menu Is A Love Story (Ecco Perché Amore). In 2017, she returned to Spiga as partner – owner where she face-liZed the space and menu to create a wholly reimagined experience. Today’s Spiga showcases Marisa’s award-winning career built on menu mastery; sensing trends; ingredient reverence; and a less-is-more approach to creating memorable, Instagram-worthy meals that use bounty from land and sea. Each recipe, with a whimsical twist.

As Boston’s foremost Italian-born female executive chef and restaurateur, Marisa is a role model for female cooks entering the field. Her passion, talent, and strength of body and spirit—both in the kitchen and in the community—have broken barriers for females in top city kitchens. Her artist’s passion; architect’s eye; her commitment to ingredient integrity; and her resolute dedication to hospitality elevate her prowess in a kitchen, with a menu, and with her fans.