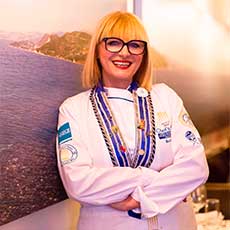 Maria Loi’s warmth and huge smile are your first welcome. Her table’s colorful bounty is fresh, festive, healthful and reminiscent of her days growing up along the seaside in Greece. The dining space echoes with laughter, comfort and delightful conversations; this is where memories are made. Everyone seated at the Loi table feels like a special friend, carefully chosen to share this life. With Loi, modern knowledge and ancient lore are carefully blended to create a new brand of “soul” food—dining that is as good for your soul as it is for your body. When Maria Loi chooses ingredients and creates recipes, she considers the ancient grains and flavors that continue to flourish millenniums later. This is an area of expertise; her book on ancient Greek dining was the only official cookbook of the Athens 2004 Olympic Games. These ingredients, as respected as the great Greek minds of Plato, Socrates and Hippocrates, are the pillars of a healthy, tasty Mediterranean diet: olive oil, Greek yogurt, grains, beans and freshly picked greens. Maria Loi’s food is about truth in flavor. Hers is a philosophy derived from the warm, scented Greek air and the sounds of loved ones around the table.

Maria Loi’s mischievous grin, sparkling eyes, and culinary prowess have made her a food superstar; she is a popular television chef in Greece and the author of more than 36 cookbooks, and over 150 magazine editions. She owns an exquisite gourmet restaurant in idyllic Nafpaktos and has a line of Maria Loi dinnerware and kitchen appliances. The Chef’s Club of Greece, a worldwide culinary organization has recognized her as an official Ambassador of Greek Gastronomy. She is also the founding partner in a fashion company.

Maria now shares her expertise and knowledge with American audiences. She quickly earned a reputation as the U.S. leader in authentic Greek cuisine and ingredients: In March 2012, Maria was invited to cook for President Obama, Vice President Biden, and 250 honored guests at the White House. Her latest book, The Greek Diet (October 2014, HarperCollins), written with veteran health journalist and athlete Sarah Toland, is grounded in the Greek Mediterranean lifestyle and combines these classic ingredients in recipes that satisfy the soul and the palette. The Greek Diet includes 100 healthy, authentic Greek recipes that use delicious unprocessed ingredients that will delight amateur and experienced home cooks.Her pasta line, Loi Pasta launched at Whole Foods Market in March of 2016, with other Greek products hitting shelves including her Loi Greek Yogurt in mid 2016. She is a frequent television guest and speaker on the topics of Greek cuisine and culture, and healthy eating. Chef Loi was invited as one of America’s top six female chefs by Fortune Magazine and James Beard Foundation to the 2014 Fortune: The Most Powerful Women Summit. Her restaurant, Loi, was a favorite of the media and celebrities and a staple on New York’s Upper West Side from 2011 to June 2014.Now, Chef Loi has brought her unique approach to Greek cuisine to Loi Estiatorio, her new restaurant in the heart of Manhattan, an ode to the flavors of Greece (opened February 2015). Chef Loi has also partnered with Hampton Forge to create Loi by Hampton Forge, her own line of cookware and tabletop products, which launched at the Chicago Housewares Show in March 2015. In January 2016, Chef Loi was the inaugural chef of The Ritz-Carlton Central Park South’s Kitchen-Takeover series, which opened to rave reviews. Most recently, Chef Loi was invited to be a panelist at the Mediterranean Diet Roundtable Conference in LA (April 2016), with professors from Harvard University, and other decision makers in the food industry.

Chef Loi is deeply involved in Greek and American causes that care for children in need. She is a founder of Elpida (the Greek word meaning “hope”), a foundation to support children with cancer. She oversees a fund that grants university scholarships to underprivileged students. Chef Loi also works closely with The Center for Discovery and their Department of Nourishment Arts as a DaVinci Master Chef. In June of 2015, Chef Loi received the prestigious Women’s Award from the Women Together Foundation at the United Nations, honoring her for the philanthropic accomplishments over the years, focusing on her time since moving to the United States.

During her diverse career, Maria spent many years representing clients Texaco, Nokia and ITT Sheraton among others. This rewarding yet fast-paced life, long hours and travel separated her from her roots and the Greek traditions of family, food, balance and nature. From that experience, Maria developed a lifestyle program for all that would nurture a healthy body and soul, influenced by the Greek ancients!