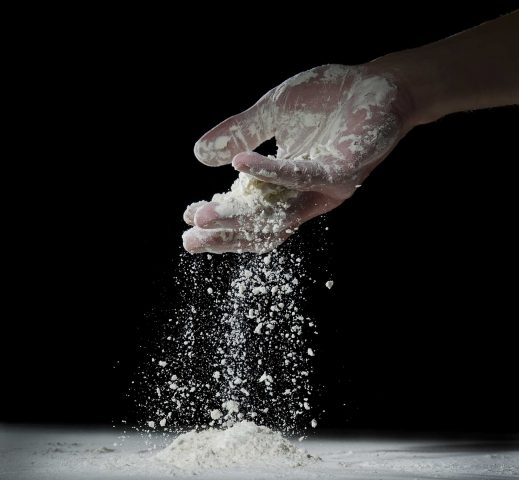 In the past few years, increasing attention has been given to the pathologic role of specific foods in IBS, like wheat and other cereals. Recent literature describes IBS patients who may experience gastrointestinal (GI) and extra-GI symptoms precipitated by the ingestion of cereals. Tritordeum is a cereal of Spanish origin derived from the hybridization of durum wheat and wild barley. It is different from classic wheat for its gluten protein composition, with fewer carbohydrates and fructans and a higher content of proteins, dietary fibers, and antioxidants. This pilot study aimed to investigate the effects of a 12-week diet with Tritordeum-based foods in substitution of other cereals on the profile of GI symptoms (evaluated by appropriate questionnaire) and the health of the GI barrier (assessed by sugar absorption test and different markers of integrity and functions) in 16 diarrhea-predominant IBS (IBS-D) patients. The diet with Tritordeum-based foods (bread, bakery products, and pasta) significantly reduced IBS-D patients’ symptoms. This amelioration appears to occur through an overall improvement of the GI barrier, as demonstrated by the reduced intestinal permeability and the decreased levels of markers of intestinal mucosal integrity, mucosal inflammation, and fermentative dysbiosis.

About 10–15% of the adult population worldwide is affected by irritable bowel syndrome (IBS), a functional, non-organic gastrointestinal disorder (FGID) that significantly impairs the quality of life (1). Since there are still no reliable biomarkers, IBS is defined by the presence of characteristic symptoms (mainly recurrent abdominal pain or discomfort with modifications in the stool habit) described by Rome criteria (2). Furthermore, IBS patients can be categorized into different IBS subgroups based on the predominant bowel pattern (IBS-D: defecation with diarrhea; IBS-C: defecation with constipation; IBS-M: a mixture of diarrhea and constipation) (3). Many IBS patients often describe a worsened symptom profile in consuming foods containing the so-called fermentable oligosaccharides, disaccharides,monosaccharides, and polyols (FODMAPs). FODMAPs are present in certain foods, including wheat and beans, and may contribute to digestive symptoms like abdominal pain, bloating, and diarrhea since the small intestine poorly absorbs them. In such a way, they are digested by colonic bacteria, releasing gas in the intestine. In addition, FODMAPs can exert an osmotic effect increasing the volume of water in the stool (4).

In the past few years, increasing attention has been given to the pathologic role of specific foods in IBS, like wheat and other cereals. Recent literature describes IBS patients who may experience gastrointestinal (GI) and extra-GI symptoms precipitated by the ingestion of cereals. The main culprit in this chain of pathophysiological events is gluten, and the spectrum of gluten-related disorders, apart from celiac disease (CD), includes herpetiform dermatitis, gluten ataxia, wheat allergy, and nonceliac wheat sensitivity (NCWS) (4–6). However, the complex milieu of nutrients in wheat-based foods, other than gluten, could be responsible for the multifaceted manifestations of IBSlike symptoms.

While in the CD pathogenesis, the immune response against the prolamins of cereals involves innate and adaptive immunity, the innate immunity alone seems to be responsible for NCWS (7). In this framework, it has been hypothesized that some monococcal diploid grain lines, characterized by a minimal activation of the innate immunity and a reduced amount of toxic gluten peptides, could be used in the diet of NCWS patients. This hypothesis deserves further clinical investigation and could be relevant also for other GI conditions, mainly IBS. Patients with IBS-D and IBS-M who generally suffer from abdominal bloating as the dominant symptom seem to benefit from eliminating wheat from the diet (8). A gluten-containing diet alters intestinal barrier function in IBS-D patients, and a previous study by Aziz et al. (9) demonstrated that a 6-week gluten free diet (GFD) reduced the score of the IBS Symptom Severity Score (IBSSSS) by ≥50 points in 71% of the cases, and this finding was independent of their HLA-DQ2/8 genotype. Thus, eliminating gluten from the diet could be beneficial also for these subjects.

Tritordeum is a cereal of Spanish origin derived from the hybridization of durum wheat and wild barley. It has already grown in Spain and Portugal and, more recently, in Apulia, a southern Italy region. The cultivation of this cereal is based on traditional techniques, and it grows well with little care, being resistant to drought, heat, and disease (10). Tritordeum has the unique characteristic of having a protein composition of gluten different from that of classic wheat, with significantly lower levels of gliadins, fewer carbohydrates and fructans, and a higher content of proteins, dietary fibers, and antioxidants (11). Although Tritordeum is not suitable for CD patients as it still contains gluten, it could be used for producing foods for patients with NCWS and those with IBS-D or IBS-M (12).

Many of the above-cited patients may show an altered epithelial barrier in the gut mucosa with changes in the small intestinal permeability (s-IP) (13). It is now established that a dysfunctional intestinal barrier could be tightly linked to persistent low-grade immune activation, thus playing a critical role in IBS (14). The evaluation of s-IP is based on the assessment of the urinary recovery of orally administered non-absorbable sugars of different sizes [e.g., lactulose (La), mannitol (Ma), and sucrose (Su)] (15). La is a disaccharide that gives information on the integrity of the paracellular pathway and tight junction (TJ), while Ma is a monosaccharide, reflecting the transcellular route.

Thus, the urinary La/Ma ratio is used to evaluate the conditions of s-IP. The third probe, Su, is an index of gastro-duodenal permeability (16). The GI barrier function is also investigated by assaying the zonulin levels in serum and feces, a human protein that controls s-IP by changing the TJ interactions (17). The serum circulating levels of intestinal fatty acid-binding protein (I-FABP) (18) and diamine oxidase (DAO) (19) are now considered as potential markers for the intestinal epithelial barrier health since they are immediately released in response to the cell membrane’s altered integrity (20).
Based on these premises, and in line with our previous research on possible different nutritional approaches as treating options for IBS-D patients (5, 6), the present pilot study aimed to investigate the effects of administering for 12 weeks Tritordeumbased foods (bread, bakery products, and pasta) instead of the corresponding wheat-containing products on the symptom profile and GI barrier function of IBS-D patients.

The GI symptoms were assessed by the IBS-SSS (21) and the state of health of the GI barrier by evaluating the abovementioned urinary and circulating markers. The minimal inflammation was assessed by dosing interleukins 6 and 8 (IL-6 and IL-8). Lastly, lipopolysaccharide (LPS) and the urinary markers of intestinal dysbiosis (indican and skatole) were also assayed.