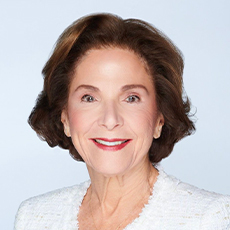 Lucy Calautti was born and raised in Queens, New York in an Italian American family. Her great grandfather was the mayor of Rosetto, Puglia and she credits her commitment to public service, political experience, and enjoyment of cooking to her deeply-rooted Italian family heritage.

While in her teens, Lucy joined the U.S. Navy and was trained as a photographer, taking intelligence photos of ships at sea. After the navy, Lucy headed west for her education and eventual work in political campaigns. In 1986, she ran the successful come-from-behind U.S. Senate campaign of Kent Conrad. The North Dakota media called the race one of the most consequential events of the century. In 1987, Lucy joined the office of Congressman Byron Dorgan (D-ND) as Chief of Staff, overseeing policy and politics in an office that represented the entire state. She managed Dorgan’s successful campaign for the U.S. Senate in 1992, and became the new senator’s Chief of Staff.

In 2000, Lucy left government service to become one of the only women executives in Major League Baseball. She headed the sport’s government relations and served as special assistant to Commissioner Bud Selig for nearly 20 years. Lucy’s lifelong love of baseball stems from her father, Pasquale, with whom she grew up attending New York Mets baseball games as a child.

Today, Lucy presides over her own strategic advisory business, Dakota Strategies, representing the Children’s Hospital Association and Baltimore Orioles baseball. She served on the Board at the Center for Native American Youth, a national organization devoted to the education and well-being of native children on reservations. She was also President of the historic National Woman’s Party, devoted to the memory of women’s suffrage. Lucy is married to United States Senator Kent Conrad (Ret.) and is mother to one grown son and one grandson.