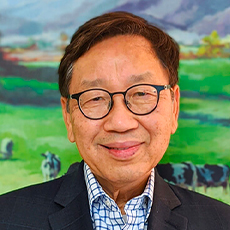 Ken Toong has been the Executive Director of University of Massachusetts Amherst Auxiliary Enterprises (AE) for the past eleven years. The AE umbrella includes UMass Dining (Residential and Retail), Conference Services, Campus Center Complex, Hotel UMass, the UMass Store, the University of Massachusetts Club Boston and UMass Trademark and Licensing Administration for the UMass System.

Nationally, Ken is one of the most recognized faces and frequent presenters in higher education’s dining and auxiliary segments.  He is a big believer in Mediterranean diet and has implemented many Mediterranean principles at various operations at UMass. Through Ken’s visionary direction, UMass Dining has become one of the nation’s most awarded programs for its innovative and quality programs, focusing on foodservice sustainability, authenticity, student success and health & wellness. Notable recognitions include Global Restaurant Award in Sustainability in 2016 , being voted #1 for Best Campus Food in the nation from Princeton Review 2021 edition, making it five years in a row and the most recent recognition of “Best New Facility” for Worcester Commons by Food Management Magazine.

In 2013, the International Foodservice Manufacturers Association (IFMA) recognized Ken as one of the recipients of the Silver Plate Award. In 2021, Nation’s Restaurant News Magazine named Ken Toong as one of the most influential non-commercial operators in a reader picks poll. Most recently, Produce for Better Health Foundation named Ken the recipient of Foodservice Leader of the Year Award.

Ken is involved in the community as a member of the Sustainable Business Leadership Council of the Harvard School of Public of Health and The Culinary Institute of America, an executive committee member of UMass Amherst Community Campaign,  first-chair of the International Foodservice Manufacturers Association (IFMA) C&U council and a member of the NACAS Research Advisory Group.

Ken received his MBA (Beta Gamma Sigma) from the University of Massachusetts Amherst and a BBA from Acadia University, Nova Scotia.