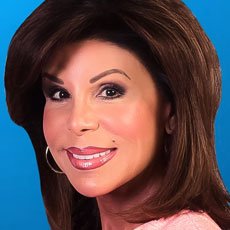 Janet Zappala is an award-winning television news journalist. She has won six Emmy awards and garnered thirteen Emmy nominations for her work at TV stations in cities across the country, including San Diego, Los Angeles, Philadelphia and currently Palm Springs. She is also the recipient of a Los Angeles based Golden Mike award for her profile on Mel Blanc, “The Man of a Thousand Voices,” and she received a first-place Associated Press award for her feature reporting, named one of the “Best in the Business” by the Washington Journalism Review.
Janet is also currently the anchor/reporter for Your Health Matters at KMIR News in Palm Springs. A certified nutritional consultant, her passion is living a rich and healthy life, and sharing her knowledge of good health with others. Janet may be reached through her Web site: www.janetzappala.com.