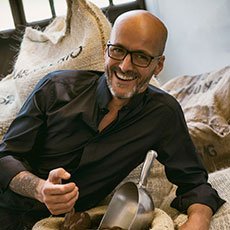 Inspired by his experience in a small pastry shop in the center of Giaveno, Italy, Guido Castagna, understood the need to become a “chocolate pastry chef”. He began by using old machines to toast hazelnuts of the three-lobed variety derived exclusively from Piedmont IGP, and with the processing of the best cocoa beans available (personally selected). The result of this initial hard work is recognizable in his guide, Naturale Metodo Guido Castagna. Guido is proud to be one of the few artisans with a vertical ownership of the whole supply chain, from beans to bar. Shops in Turin and Giaveno, along with a new production workshop (with visual processing), are evidence of a career honored with several international awards. Lead by passion, dedication and maniacal attention to the quality and ethics surrounding the macrocosm of the cocoa market, Guido has always worked without compromises, sometimes outside the logic of profit, and always nurturing respect for the “human” component, resulting in a sustainable operation not only for the environment, but also for the good of those workers in the farming countries of product origin. As an example, Guido excludes those suppliers that exploit child labor. The virtuous chain of cocoa is also promoted by producing, each year, only the necessary quantity, without resulting in waste. Precious cocoa, no longer just food but a real ingredient with multiple nutraceutical virtues, confirmed by the most recent scientific discoveries and as already elicited for coffee, has become part of an Italian artisanal and gastronomic tradition. It also has become a model of alimentation for the entire Mediterranean basin and a reflection of the customs and traditions of its peoples.