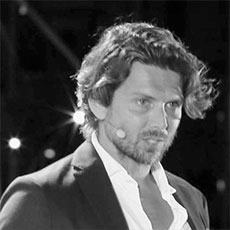 Giorgio Pomi is an author of scripts for television between 2000 and 2016, on behalf of Endemol Shine Italy, a multinational company, with head offices in Amsterdam, and producer of many of the most famous television formats in the world. He has been engaged in the writing of scripts for famous cooking shows, especially for the daily television show “La Prova del Cuoco” daytime telecast on Rai 1, along with the performance of tasks such as gastronomic consultant for the creation of recipes, casting manager and coaching of the artistic cast, in addition to the supervision of various areas related to creative ideas, from conception to artistic realization.

From 2012 until today, in parallel with the TV context, Giorgio has been involved in several projects related to nutrition, the functional kitchen, and applications in the nutraceutical field, and has been involved with the designing and curating of events, the organization of seminars, workshops, didactic and training courses, meetings and fairs on behalf of companies linked to these areas, especially for Solgar Italia (until 2017) and, subsequently, as food event manager for Nature’s Bounty Italia, (a part of the same business group), a leading company in the national marketing of natural supplements for well-being produced in the USA. From 2013 to date, Giorgio has been a teaching assistant at the Academy of Advanced Nutrition ‘Food & Supplement Cooking Academy’ on behalf of the CNM Italy– College of Naturopathic and Complementary Medicine, an authorized body with MIUR decree (Ministry of Education, University and Research) in the training and issuance of the professional diploma of ‘Nutraceutical Consultant.’ The consultancy also includes the creation of culinary-gastronomic contents and the management of the chefs involved in the teaching of the study course material. From 2015 until today, he has been a contributor to the monthly magazine Scienza Natura (www.scienzanatura.it), especially for the preparation of recipes and articles referring to the field of healthy eating, gastronomic cuisine and the functional kitchen of the ‘nutraceutical’ type.

More recently, since June 2018, Giorgio has been the founder and curator of the format ‘La Cucina dei Saperi – Nutraceutica on Tour,’ an innovative road show promoted by Nature’s Bounty, a brand of food supplements distributed exclusively in Italy by Green Remedies Spa, to bring to the territory the culture of healthy nutrition and information on how best to use daily food, super foods and supplements to achieve the best possible state of well-being.