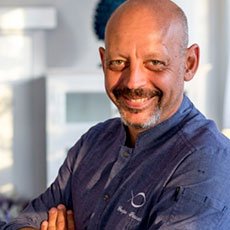 As a self-taught cook, Gianfranco Pascucci matured his art by gaining experience while working in his grandfather’s first restaurant, Isola Sacra di Fiumicino, overlooking the docks and the fishing boats of Rome’s coastline. Fulfilling a dream, after many years of abandonment, Gianfranco purchased back the same venue and transformed it into his restaurant, “Al Porticciolo”, a landmark for the gastronomic cuisine of fish. Accompanied by Vanessa Melis, his life partner and excellent business associate (named among the best Manager di Sala according to Terra Moretti “Fattore Donna”), and inspired by the lives of local fishermen, the ‘forgotten’ sea and the scents of the dunes, he earned a much deserved Michelin star in 2012, which was followed by many additional prizes and awards. Gianfranco has appeared on many successful television programs, including RAI 1’s “La Prova del Cuoco” , with an exclusive segment dedicated to seafood, and he has also authored and hosted a unique format dedicated entirely to his life, broadcast on Sky for Gambero Rosso, entitled “How Deep is the Sea” (now in its second edition). His love and innate respect for the sea (and its natural biological cycle), as well as his love for cooking, is also expressed in his life, as evidenced by his the passion for surfing, often indulging in the sport along the windy coast of Fiumicino.

For some years Gianfranco has also been an ambassador for the WWF within the project “Oasi Lago di Burano,” which provides for the conservation and enhancement of the botanical and aquatic species (from the mullet of Burano to the Cakile maritima) of the Venetian territory. Together with a wise and whimsical use of Mediterranean spices and aromatic herbs, Gianfranco’s cuisine proves witness to the flavors and values that are translated into his dishes.