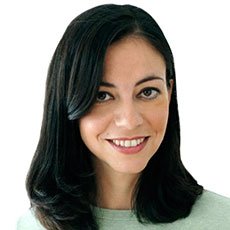 Elena Paravantes has been active in the field of Nutrition and Communications for over 20 years as a clinical dietitian, food and nutrition consultant, writer and teacher, both in the United States and Greece. Her interest in well-being and health lead her to studies in psychology and nutrition. Upon receiving her degrees from the University of Illinois, Elena started her career as a clinical nutritionist consulting patients on their lifestyle, incorporating components of the Mediterranean diet.

Upon moving to Greece, she began writing for several publications on the Mediterranean Diet, leading to editorial positions with several Greek publishing companies. She is the former Food and Nutrition editor of the Greek editions of Men’s Health and Prevention magazines, establishing the food and nutrition sections upon their launch for 8 years. Elena is currently the Health Editor for Olive Oil Times, is founder of Olive Tomato.com providing consulting services on the Greek-Mediterranean diet, writes for several U.S. and Greek media outlets and blogs for Huffington Post. An award winning, recognized expert in the Greek Mediterranean Diet, her interviews and articles have been published in many publications including the American and British editions of Prevention, Men’s Health, Women’s Health, Today’s Dietitian, Food and Nutrition Magazine, NPR, Oldways, Academy of Nutrition and Dietetics.

She has also made numerous television appearances speaking about food and nutrition and recently also cooking her own recipes on Greek television. She has been a guest speaker at many international conferences where she has been invited to speak about the Greek diet and nutrition promotion in the media.In Greece and the U.S. she has worked as a clinical dietitian as well as a food service dietitian for Aramark.

She was also the first Food and Beverage Director for Starbucks in Greece, organizing and implementing the company’s food program in Greece, incorporating Greek and Mediterranean inspired foods to the menu. Elena established and taught the Introductory Nutrition course (the first of its kind) at the American College of Greece in Athens, Greece and also managed its Nutrition Department.An active member in the international nutrition community, Elena is the Immediate Past-President of the American Overseas Dietetic Association, and has been on the Board of Directors for over 5 years.