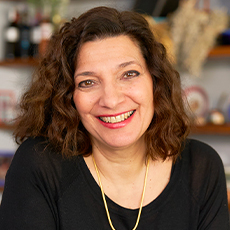 Diane Kochilas got her first taste of Greece as a 12-year-girl, biting into a lush, warm tomato cut straight from the vine at her paternal aunt’s village home on then remote island of Ikaria. She was won over and has devoted her life to bringing Greek food and culture to an American audience.

Today. Diane is one of the world’s foremost experts on Greek and Mediterranean cuisine. She is the host, creator and co-producer of My Greek Table, the award-winning 13-episode per season cooking-travel show about Greece that airs nationally on Public Television. The series is in its fourth season.

Diane hails from the Blue Zone Greek Island of Ikaria and New York City and brings a combination of innate Blue-Zone wellness and result-oriented NYC spirit to everything she does. She is an award-winning author of more than 18 books on Greek-Mediterranean Cuisine and runs the Glorious Greek Kitchen on Ikaria Cooking School every spring and fall on the island. Diane also organizes culinary excursions and walking tours in Greece and cooking classes throughout the United States.

She has been on the forefront of bringing healthy Greek and Mediterranean cuisine to an American audience for more than 25 years. Diane has been consulting chef for many of the top Greek restaurants in the United States and for years has worked with university dining services at Harvard, Yale and UMass Amherst to bring healthy Mediterranean cooking to student dining halls. She is a frequent speaker at the CIA and other major culinary institutions.
……
Awards:
Taste Achievement Award, 2020, My Greek Table
IACP Nomination 2019, My Greek Table
Best Cookbook, 3 IACP Awards
Books for a Better Life Award
Art of Eating Award, long list