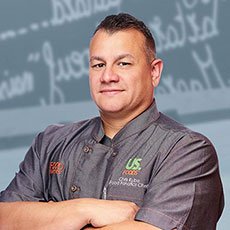 Chef Chris Kube began his career in the notable Charleston Place Hotel while attending Johnson & Wales University. From there he served Presidents and dignitaries in D.C., became a bread maker in Northern California and worked at the St. Regis Hotel in New York City. The breadth of his experience and diversity of his skills make Chef Kube a prime Food Fanatics Chef.