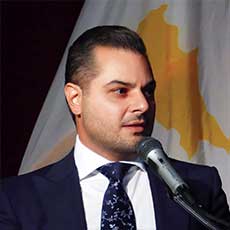 Hon. Aristos A. Constantine | Trade Commissioner of the Republic of Cyprus, North America

Trade Commissioner of the Republic of Cyprus, North America

Aristos Constantine is the Trade Commissioner of the Republic of Cyprus for North America and head of the Cyprus Embassy Trade Center in New York.

The Cyprus Embassy Trade Center is the trade and economic arm of Cyprus’ diplomatic representation covering North America and operates under the auspices of the Ministry of Energy, Commerce & Industry of the Republic of Cyprus.

Under the direction of the Trade Commissioner, its primary role is that of strengthening and expanding the bilateral trade and economic relationship between the Republic of Cyprus and the USA and between Cyprus and Canada. The activities of the Trade Center include promoting, facilitating and attracting foreign investment and fostering the expansion of exports of Cyprus’ goods and services, in addition to monitoring related market and policy issues.

Prior to his current position, Mr. Constantine served as Business Development Advisor for the United Nations Development Programme, Division of Western Asia, Arab States and Europe.