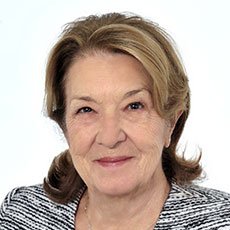 Antonia Trichopoulou, MD, PhD, is President of the Hellenic Health Foundation and Professor Emeritus, School of Medicine, University of Athens. She has served as president of the Federation of the European Nutrition Societies (FENS) and as chairperson or key member of numerous Greek, European Commission and World Health Organization Committees. She has received numerous honors and awards and was decorated by the President of the Greek Republic with the Golden Cross of Honor for her work in nutrition and public health. In 2011, she received the Federation of European Nutrition Societies (FENS) Award for her “outstanding nutritionist career”.
Her scientific work has focused on public health nutrition and nutrition epidemiology, with emphasis on the health effects of the Mediterranean diet and traditional foods.
Antonia Trichopoulou has been included in the 2014 Thomson Reuters list of the Highly Cited Researchers in the field of Social Sciences, General and in 2018 has been named a Highly Cited Researcher by Clarivate Analytics .